What, what?! That's right, folks, it's RAINING in Tahoe!

^ The view at RowTahoe HQ in Incline Village.

The storms that have caused flooding and mayhem in Reno the past two days have pushed west into the mountains, and it has been raining all day. And we're not talking about a few sprinkles, either - this is a consistent, continuous, dousing rain all morning.

Fortunately, it's supposed to clear out this afternoon and return to normal. That means no significant change to Sunday's forecast - expect clear skies, temps in the mid-50s, and a mild breeze from the Southeast at race time.

We are GO for the Tahoe Regatta, so start loading your gear!

Very quick update today - no change from yesterday. The air is clear, temps are warm (but not super hot like last week), and the forecast still shows ideal conditions Sunday morning. Thunderstorms in the Sierra continue to keep everyone on edge, but so far we haven't had any major fires sparked by lightning.

Everything is on track for a great weekend. Stay tuned for another update tomorrow afternoon.

Very quick update today - no change from yesterday. The air is clear, temps are warm (but not super hot like last week), and the forecast still shows ideal conditions Sunday morning. Thunderstorms in the Sierra continue to keep everyone on edge, but so far we haven't had any major fires sparked by lightning.

Everything is on track for a great weekend. Stay tuned for another update tomorrow afternoon.

After a sweltering week, clouds moved in yesterday and temps dropped significantly. The wind picked up a bit yesterday morning during our survey row of the Long Course, bringing back some open water (though not quite "coastal") conditions. Today is overcast with a forecast high of 73, a welcome relief from the mid-90s we had Thursday through Saturday. It even rained a bit this morning!

We expect the skies to clear and temps to rise again starting tomorrow. By Sunday we'll be back to the high 70s, maybe 80 for the high. That means you can expect mid- to high-50s at start time, possibly rising as high as 70 by the time all of the Long Course rowers finish up. If the current forecast holds, there shouldn't be any wind at all - it could be totally becalmed at race time.

We are keeping an eye on a system that could bring thunderstorms Friday and Saturday. It shouldn't impact the regatta, but we don't love lightning up here in wildfire country. Hopefully it doesn't materialize. 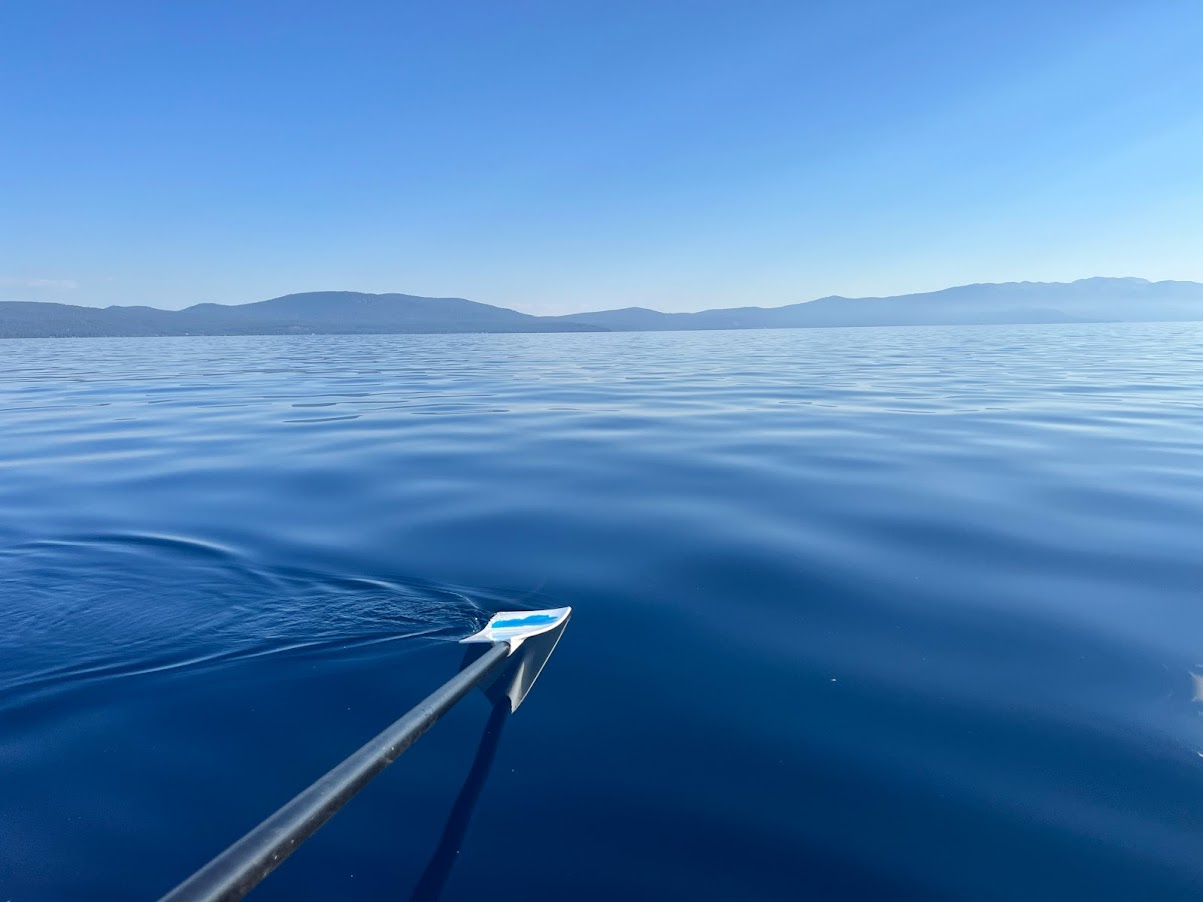 See that picture above? That was taken from the center of Lake Tahoe yesterday morning. More on that later...

Conditions over the last few days have been outstanding. The AQi has settled into a a consisted "yellow" patter, with counts in 40s-60s - a bit hazy, but no smell of smoke. Until this afternoon, it was almost completely becalmed. Some storm clouds rolled in and brought along a bit of wind late this afternoon, but thunder and rain never materialized.

Yesterday I had the privilege of rowing across the full width of Lake Tahoe for the first time. Some friends from San Francisco had planned a relay swim, and asked me to accompany them as a pilot. I took my LiteBoat LiteRace Carbon coastal single, expecting some chop, but could have easily rowed a racing shell almost the entire way - it was that calm!

We'll post daily updates between now and regatta day, but it's looking pretty great up here. We can't wait to see you next Sunday!

Nope! Well, kinda. Since Sunday we've seen significant improvement in air quality. It's still pretty hazy, but the AQi has dropped a lot over the past few days, and is now in the very comfortable "Yellow" zone, with counts in the 50s through 70s. This is well below our threshold for canceling the regatta - put another way, if the race were scheduled for today, we would have raced!

To the put the current air quality in perspective, it's not much worse than what you'd be breathing if you were in NYC right now: 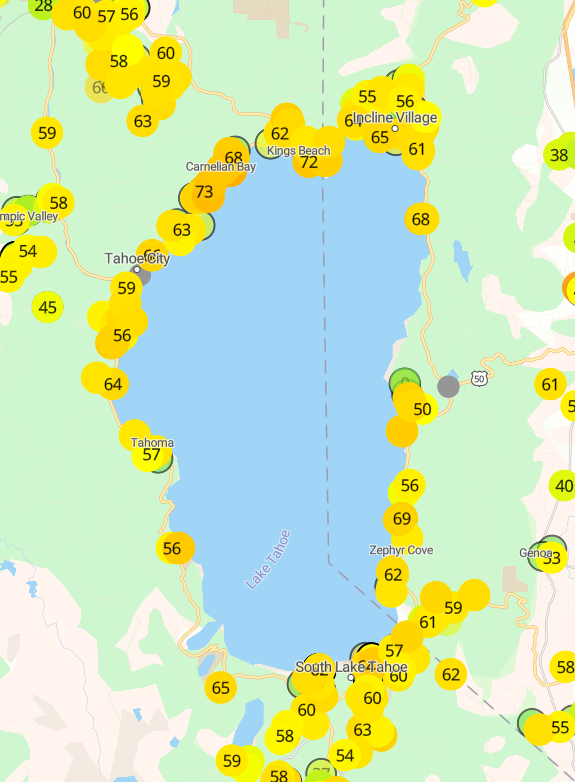 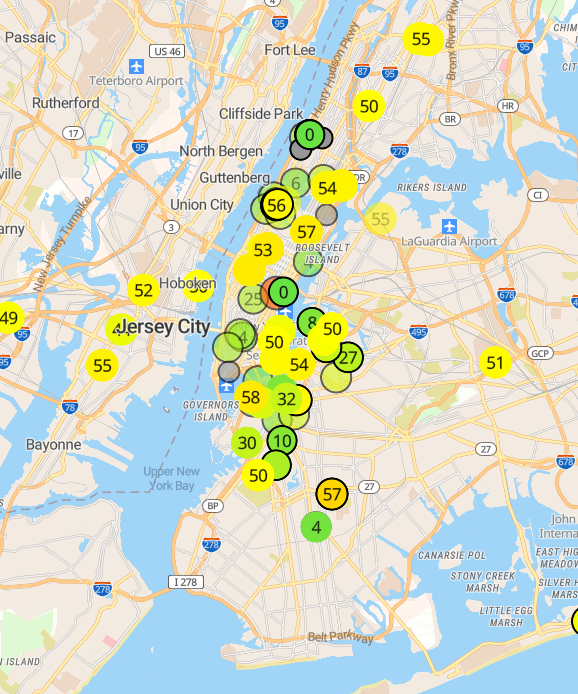 Or, to put it in rower terms, I was able to erg outside for 30minutes continuously at varying rates and pressure each of the past two days without any respiratory irritation (though my arms and legs are definitely irritated - thanks, Johan.)

Why the improvement? Three factors:

So where does that leave us? Although we know the situation can change quickly, the past few days have been extremely encouraging. I hope I don't regret these words, but right now I'd put the odds at 80% that we have a regatta next Saturday.

Remember to register. 11 days to go!

With exactly 2 weeks left until the regatta, we are experiencing our first significant smoke event of the season. After an almost completely clear summer so far, we woke up this morning to a familiar smell in the air. A quick check of Purpleair.com confirmed what our noses were telling us - smoke from the Oak Fire has arrived:

AQi counts in most of the Tahoe Basin are very high, with the notable exception of Kings Beach. If the regatta were held today, this would be a borderline call, as the venue looks relatively clear even though the surrounding area is quite bad.

This serves to show how quickly conditions can change. Here's a shot of the lake yesterday during a group row at Cave Rock:

A bit about the Oak Fire... This is a very fast-moving fire that only started Friday afternoon. It is located just northeast of the town of Mariposa, CA, near the western entrance of Yosemite Park. This is the same area where the recent Washburn Fire threatened the Mariposa Grove of Giant Sequoias (which, thankfully, were saved). The Oak Fire is growing VERY quickly: with 0% containment, it has already reached 12,000 acres in less than 36 hours!

Fortunatetly, the area burning is almost due south of Lake Tahoe, so on most days, the prevailing winds should push the smoke to our east. An unusual easterly wind pattern in the area of the fire today is causing the smoke to head west before being carried up into our area. At the moment, we don't expect this to last; the smoke forecast shows it blowing out later today.

Time will tell, of course, but we're still very confident we'll have a regatta this year. Get your registrations in soon so we can get an accurate count of how many people to expect!

32 days to go! If you plan to race, please register ASAP. We're up to 10 clubs participating from as far away as Scottsdale, AZ, and we expect many more to join us on August 7th.

We have our first wildfire of the season affecting air quality in the Tahoe Basin. So far, the impact of the Electra Fire has been minimal, with slighly elevated AQi counts yesterday afternoon that have returned to normal this morning. Electra is burning in the burn scar from the 2015 Butte fire, so fuel loads are relatively low; hopefully, that makes it easier to fight. 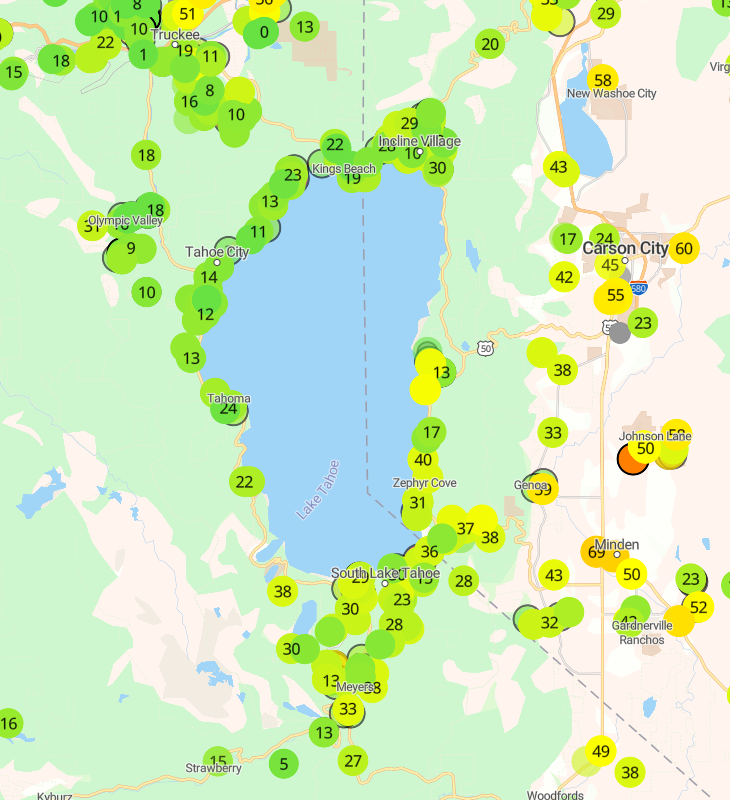 ^ Clear air in the Basin this morning!

Meanwhile, some morons decided it would be a great idea to set off illegal fireworks at Cave Rock on Monday evening, sparking a minor blaze that consumed about an acre before it was extinguished. Why do people do things like this???

The 2022 North Tahoe Regatta is less than six weeks away! If you plan to attend, now is the time to register. We currently have 8 clubs participating from as far away as Scottsdale, AZ, and we expect many more to join us on August 7th. 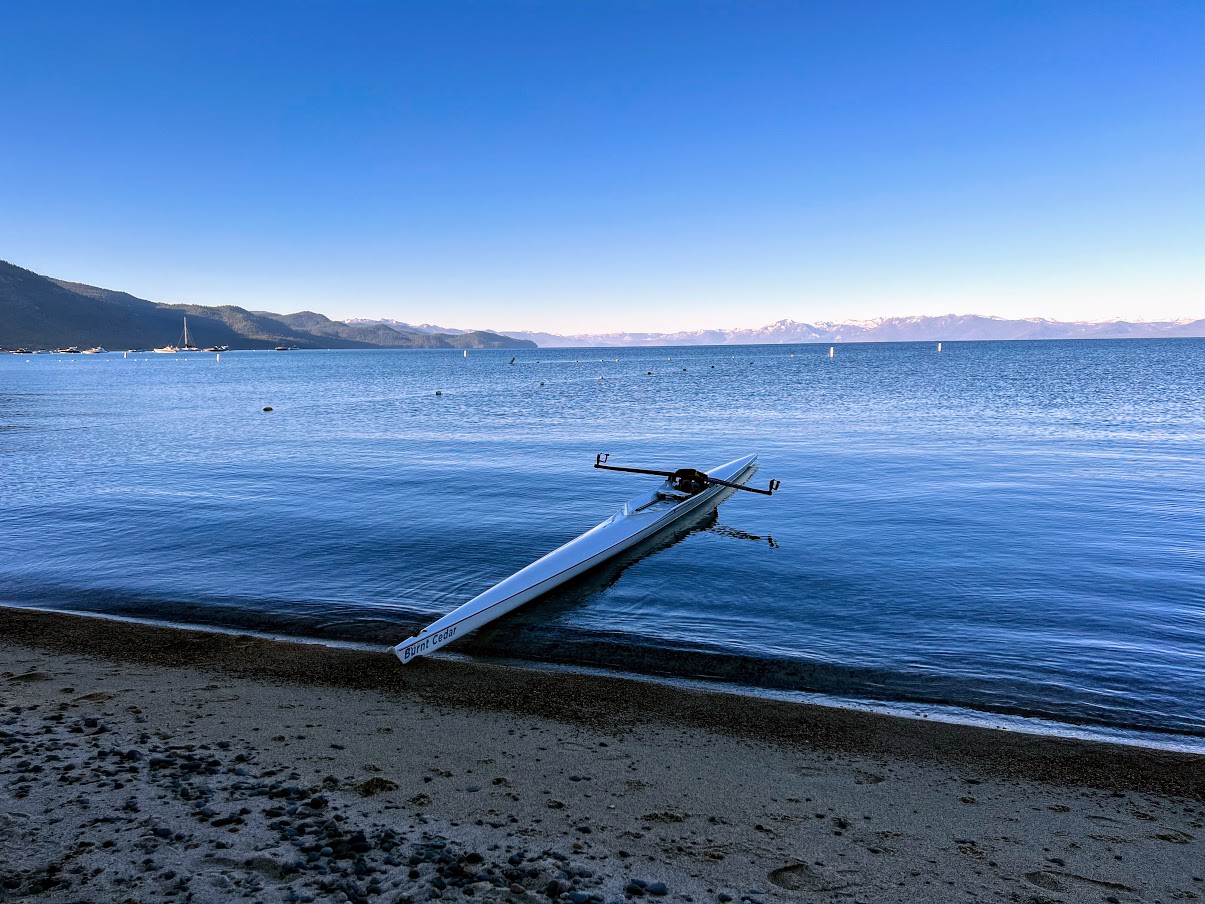 Here’s a quick update on conditions here on Lake Tahoe…

The wacky weather we’ve been having this year continues, alternating almost weekly between “warm and beautiful” and “windy and cold.” We even had some snow in June! Suffice it to say, if the regatta had been scheduled for any weekend in June 2022, it might likely would have been canceled due to poor conditions. 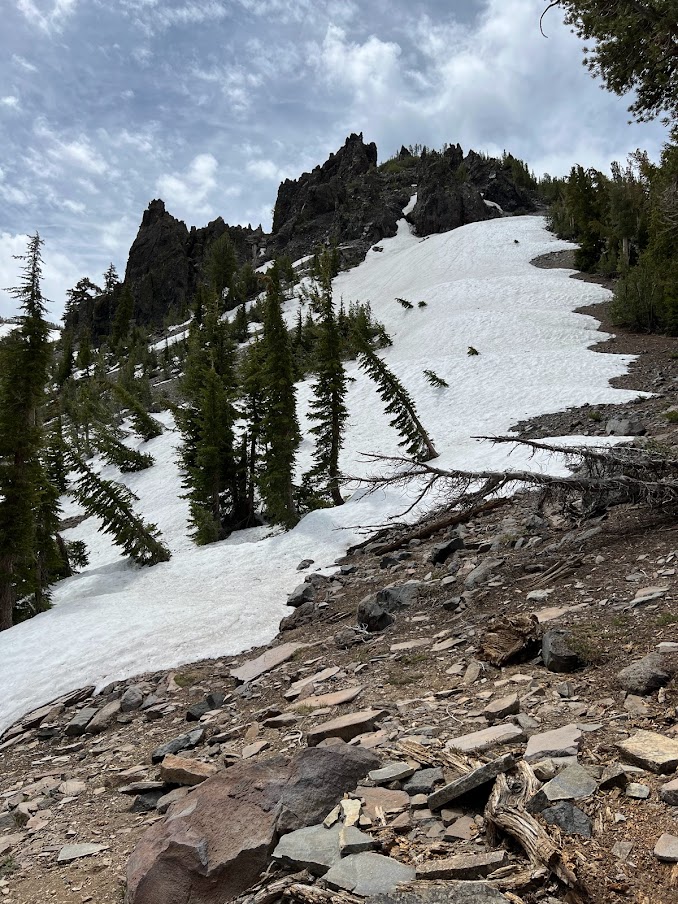 On the bright side, the cool temps and precipitation have served to suppress fire danger so far. Despite a very poor “water year” and dangerously low snowpack earlier in the Spring, there is still snow up on many of the high elevation peaks and trails (I hiked part of the TRT last weekend and can attest to this). Hopefully that remains the case and we have clear air through early August - so far, so good.