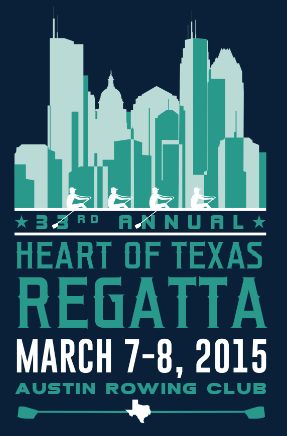 Austin Rowing Club hosted the first annual Heart of Texas regatta on March 19, 1983 using a three lane 1500 meter course that ran from MOPAC bridge eastward to Lamar Blvd. Nine universities from five states competed for honors as well as ARC. ARC had to borrow boats from the universities in order to enter certain events, as the club only owned two eights at the time.

By 1994, the Heart of Texas grew to 60 events with 230 entries and expanded to two days of racing. By 2003 the regatta moved to Austin's Festival Beach in order to accommodate an increasingly large attendance from across the State and the entire Southwest region. By 2013 the race consisted of over 1,400 competitors.

From milk jugs used to mark the course in 1984 to the fully buoyed and professional lanes of today, ARC has carefully studied, invested in and improved the experience for all racers each year. The words of Austin's former Mayor Frank Cooksey (1986) still apply today-- "I wish all the athletes success in your racing and hope that you will continue to return in the years to come. May you always have smooth waters."