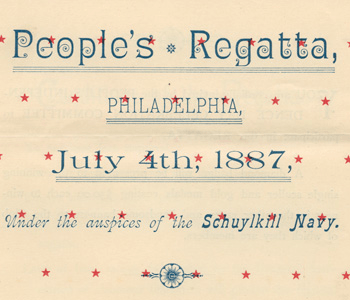 The regatta was re-named the Independence Day Regatta in 1958 in recognition of the Schuylkill Navy’s 100th anniversary.  At a time of anti-communist fervor, the name “People’s Regatta” probably did not sit well with the organizers.

Philadelphia, July 3 – The stage is set for the annual People’s Regatta over a mile and a quarter of the national race course on the Schuylkill River tomorrow afternoon.  All the out-of-town crews have arrived and are house along Boat House Row.  The sixteen events on the program have attracted a big entry list from Washington, Detroit, New York, and Northern New Jersey, and, with a heavy entry from the best sculls and sweep men of the Schuylkill navy, some interesting rowing history should be written before the regatta draws to a close.

The calibre of the crews which will cross blades tomorrow afternoon is much above the ordinary and regret is expressed that the champions Duluth and Argonaut crews did not enter.  A crew from Canada has always been seen in the People’s Regatta, but this year the sturdy Canadian have answered the call of “King and country” and are in military camps.

The races for the eight-oared crews will be the feature of the regatta.  There are three events of this kind – junior, intermediate, and senior.  The race for the juniors is attracting the most attention, as eights from Detroit, New York A.C., and the Potomac crew of Washington will cross blades with the Pennsylvanian Barge and Malta Clubs of the Schuylkill Navy.

The Pennsylvania Barge and New York A.C. Clubs think their chances are so good in the junior race that they have entered the intermediate event, but will find strong opposition in the Vesper intermediate crew, which will go to the starting line fresh after the other two crews have raced in the junior event.

Malta and Vesper will fight it out for honors in the senior eight event.  Malta has defeated Vesper in the American Regatta and Vesper has turned the tables in the Navy Day Regatta.

Vesper is banking on its “favorite son”. Jack Kelly, to come through with three senior sculling events – singles, doubles, and centipedes.  Kelly will find worthy foeman in the senior events in Rooney of Ravenswood and Henry Heller of the Metropolitan Club of New York.  Heller has rowed some remarkable races, and those who have followed his rowing career say he is an extremely hard man to beat.

The races will start as 2 o’clock, with the junior single sculls as the curtain raiser, and will be run off in fifteen-minute intervals finishing with the senior eight-oared race at 5:45.

Philadelphia, June 30, 1949 – AP – One hundred and 50 crews from Boston to Richmond, Va., have entered the Peoples Regatta to be held on the Schuylkill River July 4.

The regatta, one of the oldest in America, will be held on the National championship mile and a quarter course on the Schuylkill River above the Columbia Ave. bridge.